Learn How We Generated 38 Solar Leads at $5 per Lead on Facebook in 2.5 Weeks 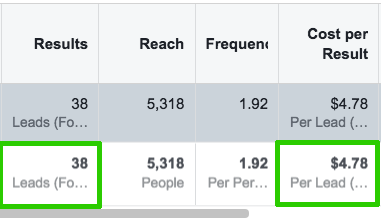 We begin every campaign using a wide swath of different images, videos, and slight iterations in our ad copy. We stick to our local ad copy template that is absolutely crushing it right. It’s able to immediately call out our target customer, and quickly proves to homeowners why we are qualified to help them save money with solar. We are big fans of authentic photos and videos of your team on installs, customers, trucks, signage, team photos…etc Anything that is authentic and communicates trust. 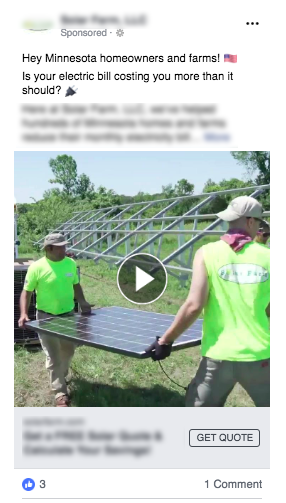 This January I got invited to speak at AEE Solar’s Annual Dealer Conference in San Diego to talk about our lead generation programs we set up for our residential and commercial solar clients. There I met a handful of very bright solar owners who like many business owners, understand that they need online marketing, but necessarily don’t where to begin, or rather, don’t have the knowledge or tools to audit their current lead generation, and map out the steps to improve upon it.

One particular owner I spoke with, James, had some great questions. His website was outdated, didn’t even have a Facebook page up for his brand, he really hadn’t tried any type of inbound marketing. He had mostly be relying on referrals and the occasional call center campaign.

Fast forward a month later, James contacted me to discuss next steps. I suggested we get him on a Facebook campaign.

He had some great questions, very basic ones about how Facebook Ads work, which made me realize just how early-adopter Facebook ADs are still for the solar industry. Questions like:

I was happy to answer all of his questions but made me think of how to better frame how Facebook works and why it’s so good at finding our target customers. Luckily for you we’ve been iterating with solar campaigns for awhile now and our targeting interests are absolutely dialed. More importantly we understand what elements psychological elements to address in our ad copy and ad creative for a direct response.

The Facebook solar lead campaigns we build for our clients are so much more successful when we have authentic photos and videos. Photos of staff working on an install, in an office. Customers around the systems, holding signage, giving the thumbs up. Professional video testimonials, or even low budget “selfie-style” testimonial videos.

It’s the little details where we have a split second to disrupt the mindless scroll, to convey relevancy and trustworthiness with our ad copy and ad creative.

Like having the background of photos or aerial images that clearly show they’re in the same neighborhood as our audience. Photos of real customers, not staged stock photos.

They didn’t have much, but had an incredible video another marketing agency had made for them. It was heartfelt, produced well, and really gave us an authentic glimpse at the owner and their team.

So we cut up the 1:30 minute video down to various 30 to 50 seconds versions, highlight the key benefits, as well as exporting screenshots from the videos to test as images since he really didn’t have professional photos available. Ended up being a really successful campaign. 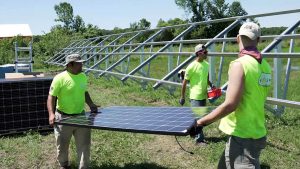 I learning something new with every conversation I have with solar company owners. One theme is how each company frames the value of their solar systems. In this case particular I loved how James framed it.

“You know everybody has a legacy. That’s why I like working with farmer groups, because they have to think long term. If you had a farm that you were gonna give your children to have no or little electricity bill, that’d be kind of cool and that helped the farm have lower operating costs. Still it’s something you have been invest in for the future and not everybody’s willing to do that. But farmers see they’re in it for the long haul and so that’s part of the excitement of getting the solar system, is not just what they’re doing now but what it’s gonna do in the future.”

There is some great psychology behind this. He’s highlighting the gift of little to no electricity bill that will be realized across multiple generations. He distinguishes those who prepare for the future, and who do not. Who doesn’t want to be like a farmer, and plan for the future, the long haul? “Not everybody’s willing to do that”. Really helps create this mindset that those who invest in solar, are long term thinkers, who want to leave their kids something that will yield them a return.

Safe to say campaign has been a huge success in just the first 2 weeks.

Will update with more information like appointments, conversion rates, and installs sold as we go along. So far client has booked 9 appointments from the first week.

If you’d like to learn more about our done for you lead generation systems, you can learn more at https://www.mysolarpipeline.com.

We are a digital marketing firm specializing in building service companies their own high quality lead generation systems. We begin by providing firms a detailed blueprint of the exact strategies, tactics, and channels to build a sustainable, predictable pipeline of high quality leads. Our team of expert inbound specialists craft your business a customized set of systems that generate high quality leads year around so you’ll never need to hire another marketing agency again.

Manage Cookie Consent
To provide the best experiences, we use technologies like cookies to store and/or access device information. Consenting to these technologies will allow us to process data such as browsing behavior or unique IDs on this site. Not consenting or withdrawing consent, may adversely affect certain features and functions.
Manage options Manage services Manage vendors Read more about these purposes
View preferences
{title} {title} {title}